Endexx Corporation (EDXC): The Next Cannabis Company to Skyrocket in Valuation?

Madelaine Petsch and Fabletics Team Up on Second Limited-Edition Collection

Endexx Corporation (EDXC): The Next Cannabis Company to Skyrocket in Valuation?

by Michelle Kellett
A A

Tremendous change is happening already under the radar, Cannabis and its derived products are being legalized both globally and within North America. Conventional stock markets like the NASDAQ are continually listing and trading more and more companies from this industry. Established in 1971, NASDAQ is an electronic marketplace for securities and ensures prompt and secure transactions. Investopedia reports that 35 states already allow the use of marijuana and its derived products in one form or the other after approval of the legalization initiative on their ballots in the presidential election 2020. It also mentions that while several companies within the industry are currently reporting losses due to their investment owed to their massive investment undertakings to cultivate the upsurge in revenues.

The legislature and the executive branches of the government and their operations have had a huge impact on the marijuana industry. Forbes reported that cannabis stocks hiked after the news of Jeff Sessions being asked to resign from his post as the Attorney General by the president as investors saw the news as a positive catalyst. The pro-marijuana crowd within congress has been increasing, Politico observed that in 2019 about 296 members of Congress (68%) from 33 states that have legalized medical marijuana, the representation is likely to translate into federal laws being passed.

Vice President Kamala Harris co-signed the Marijuana Justice Act and has expressed support for decriminalizing marijuana and expunging conviction records for those charged with marijuana-related crimes in order to implement decriminalization and legalization. 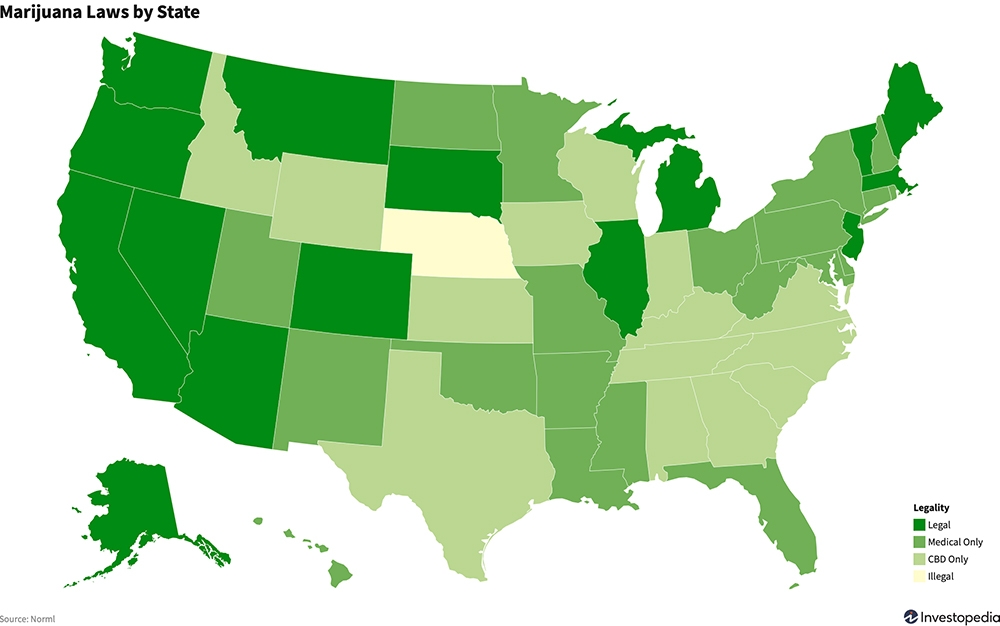 New Frontier Data, a trusted cannabis industry analytics company, stated that the market for CBD will grow from $390 million to $1.3 billion by 2022. While the Brightfield Groups declared that the market can reach $22 billion by 2022, justifying these claims, the managing director stated that “We are a team of highly conservative analysts and we did not take this lightly – I honestly believe that these are conservative numbers. We have no rose-colored glasses in terms of the bizarre and challenging regulatory framework that surrounds this industry, it will always be two steps forward, one step back. There are sure to be some problematic regulations and bumps along the way. But there is too much momentum, too much demand, and too much potential for this industry not to explode.”

Despite the legalization drive, the entry of CBD treatments into the mainstream remains slow but sure, in 2018, the FDA approved Epidiolex by GW Pharmaceuticals, placing it in the Schedule V of the Controlled Substances Act by the U.S. Drug Enforcement Agency (DEA). The eventual entry of other CBD based therapeutic products into the mainstream through FDA approvals seems likely owed to such precedents. Reputable publications have been realizing the potential within the industry, sources such as Barrons have compared Marijuana Stocks to Bitcoins owed to the potential and the rampant increase in value.

The public perception towards marijuana and its medical use has been changing steadily, a repeat survey by Gallup inquiring about support for the legalization of Marijuana has duly observed the phenomenon.

Back in 1969, when the survey was first carried out, only about 12% of Americans supported the legalization of marijuana, however, the support has been undeviatingly increasing. Up until 2000, a mere 30% supported marijuana legalization and in the subsequent two decades, the percentage of pro-legalization people has reached an all-time high of 68%. 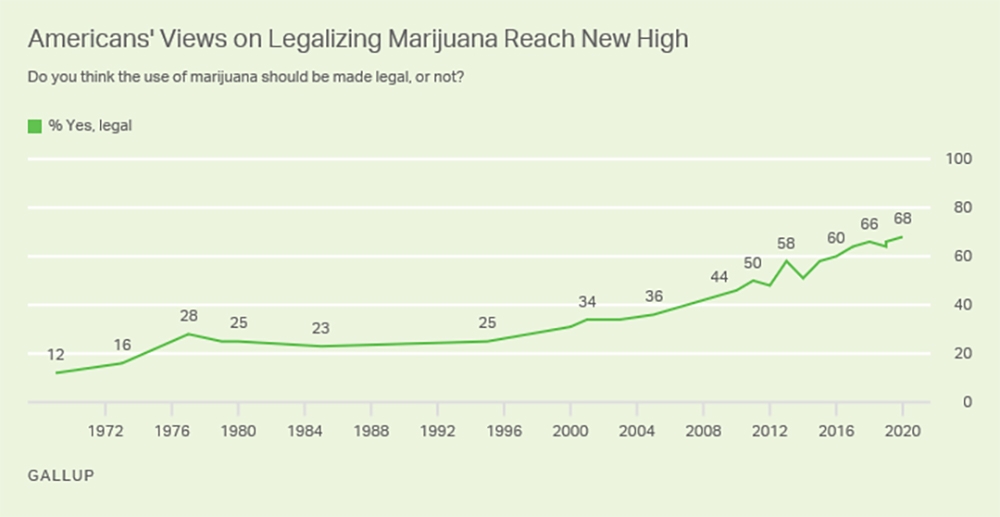 More recently, marijuana stocks underwent a surge subsequent to Chuck Schumer’s drive for reforms, the Majority Leader Senator aims to end the federal prohibition, improving the overall business environment within the industry. Senators Cory Booker of New Jersey, Ron Wyden of Oregon also joined Senator Schumer in a statement promising to introduce the legislation in a few weeks. The buoyancy in the sector is somewhat owed to the fact that the Democratic party will be in charge of the Senate, The House, and The White House, essential to introduce reforms and initiatives long been stuck in the legislative pipeline. One of the likely candidate legislation is the MORE Act, which Kamala Harris co-introduced in the House, with the Democrat victory in Georgia, such legislation is more probable to become law. It is also believed that President Biden’s Administration will introduce much-needed reforms to cannabis laws.

A recent acquisition within the industry is creating a huge buzz, GW Pharmaceuticals’ stocks reached an all-time high when Jazz Pharmaceuticals announced a takeover deal worth $7.2 billion. The stocks skyrocketed by 46% following the announcement, individuals holding GW Pharmaceuticals’ stock are set to receive $200 in cash and $20 Jazz stock per share, which is a 50% premium over the closing stock price of $146.25. GW Pharma has come a long way from 2018 making a mere $15 million in revenue to making $311 million as of 2019, a rampant increase in just twelve months, the company aims to continue the trend. With Epidiolex making about $ 576 million in sales in 2020, the GW Pharmaceuticals’ acquisition appears to be a worthwhile deal for Jazz. Another big news from the industry is the Aphria and Tilray merger, the new emerging entity will be called Tilray and aims to become a major global player. MarketWatch also observed the surge in cannabis stocks in anticipation of improving the regulatory environment.

With all of this considered we must understand that GW Pharmaceutical is the first but not the last company to experience such a huge positive shock in valuation, and it is not merely by luck that the company has received such a lucrative offer. Epidiolex is the first CBD based drug to receive FDA but it will definitely not be the last. There are several major players within the industry that have been strategically placing themselves to cultivate the benefits of an improved and friendlier regulatory environment. One such company is Endexx Corporation, one of the pioneer industry players. Their multi-faceted global operation includes several projects in the timeline; a joint venture launched with the music industry mogul DJ Khaled, international expansion through provisional licenses in Jamaica, clearance to distribute in Guam, distributional reach with its flagship brand, CBD Unlimited over 1,000,000 stores in North America, the launch of a new ‘Value Line’, the launch of five distinctive counter-sold products, acquisition of Kush Inc. (Kushwear Brands), CBD Life Brands (Nero Water), and Retail Pro Associates (Ronald Cotting and Stephan Herron), are just a few major developments with the underdog. Endexx Corporation (EDXC) posted $1.97 million in sales, a 78% increase over the last year.

With several revenue-enhancing undertakings in the pipeline, EDXC is looking forward to rampant growth in revenues, and with a reduced cost of sales through strategic investments, the company expects to make upward of $25 million in revenues in the following twelve months.

GW Pharmaceuticals posted a P/E of -1.73 while still making a huge premium for its acquisition by Jazz. With the EDXC projection, a stock price of $2.73, a profit of $.03 per 25 million revenue and 450 million outstanding shares, the company is looking at an Earnings Per Share (EPS) of $ .033, therefore a Price/Earnings ratio (P/E) of 91 (Bloomberg Ratio). One important fact to be considered here is the Endexx Corporation is an industry pioneer all set for exponential growth, with similar indications like the GW Pharmaceutical. EDXC’s portfolio covers the newly emerging pet CBD products as well as a joint venture with a mega social media influencer. In the digital world we live in, no other industry player has such a tremendous, multi-faceted potential for growth.

A Recent Interview from CEO, Todd Davis with Endexx Updates can be seen here: Endexx Facebook Shareholder Page and Video.

by Hayley Chowdhry
No Result
View All Result